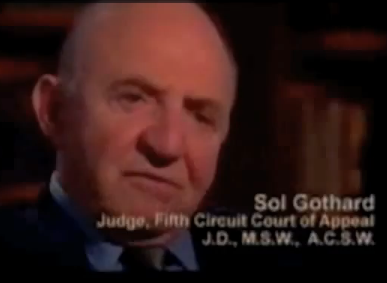 Judge Sol Gothard, JD, MSW, ACSW, was elected to the Fifth Circuit Court of Appeal for the State of Louisiana in 1986 where he served as Senior Judge, until his retirement in 2005 .

He was formerly Chief Judge of the Juvenile Court, Parish of Jefferson, State of Louisiana, having served there for fourteen years. Before being elected Judge in 1972, he was engaged in the private practice of law for over ten years. Prior to that, he was a social worker for sixteen years in a variety of settings. He has a Masters degree in social work from Case Western Reserve University, and a JD from Loyola University in New Orleans. He is an Honorably Discharged Veteran of the United States Army.

He is Past President of the Louisiana Council of Juvenile Court Judges. He teaches at Tulane University Graduate School of Social Work, where he has the rank of full professor.

In the past, Judge Gothard was selected “Citizen of the Year” by the Louisiana State Chapter of the National Association of Social Workers; he was awarded the Alfred E. Clay award for significant contributions to children by the Children’s Bureau of Greater New Orleans; he delivered the commencement address to the graduates of the Tulane University Graduate School of Social Work, and the commencement address to the graduates of Mandel School of Applied Social Sciences of Case Western Reserve University, where he was also honored as “Alumnus of the Year” .

He delivered the keynote address at the closing plenary of the 1990 NASW annual conference in Boston, which was attended by approximately 5,000 social workers.

Judge Gothard is a member or past member of the Board of Directors of numerous organizations, including The American Professional Society On The Abuse Of Children (APSAC), The American Humane Association, Children’s Division, The National Organization of Forensic Social Work (NOFSW), 2000: Year of the Humane Child, One Voice: The National Alliance for Abuse Awareness, Our Children Our Future Charitable Foundation, and the Louisiana/SPCA. He is currently vice-chairman of the Louisiana Animal Welfare Commission, and President of the Council for Family Court Reform.

His most recent publications include: “The Evolving Law of Alleged Delayed Memories of Childhood Sexual Abuse” (APSAC Journal); “Therapeutic Jurisprudence In The Appellate Arena-A Louisiana Jurist’s Response”( Seattle University Law Review); “‘Truth’ versus ‘Justice’ In The Legal Arena: A Survey Of Judges, Lawyers And Mental Health Professionals”(Louisiana Bar Journal);.” He recently taught two Internet Courses on “The Social Worker in Court: Playing Ball in an Unfamiliar Ballpark” and “Child Sexual Abuse and the Courts,” under the auspices of the Tulane University Graduate School of Social Work.

He currently presents power point presentations at many conferences and to many groups, organizations and schools. His recent presentations include “Human Abuse/Animal Abuse: Psychological and Legal Implications; The Courts and Judges in Child Abuse and Custody Cases: What’s the Problem?; Conducting Custody Evaluations in the Best Interests of the Child: A Judge’s Perspective; Domestic Violence and Child Abuse Allegations in Custody Cases; The Forensic Worker in Court: Playing the Game in an Unfamiliar Ballpark; Disorder in the Court: High Conflict People and Misuse of the Courts, Particularly in Custody Disputes ; The Judge and the Court System in Custody and Visitation Cases: “Truth” versus/and/or “Justice”?; Social Workers, the Law and the Courts: A Judicial Perspective. 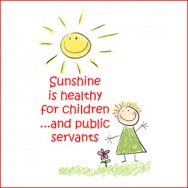 Please contact PROTECT.org to find ways you can help. Thank you!