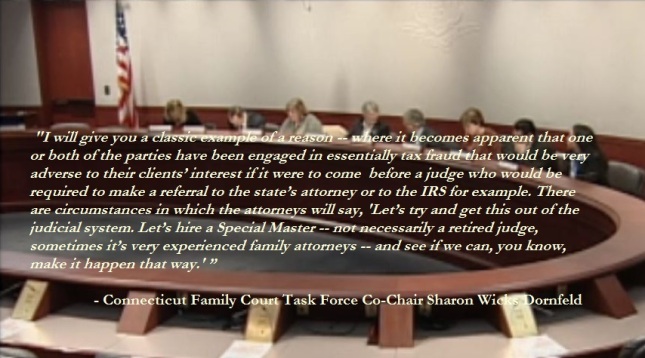 Click on above link for Connecticut Task Force December 10, 2013 video

As Ms. Verraneault spoke those words, most task force members probably dreaded the thought of volunteering their time for an extended period. Yet every few weeks, the task force meets, and another can of worms opens – with reasons to continue the study for as long as it takes.

Another can opened this past Tuesday, when Co-Chair Sharon Wicks Dornfeld spoke about her knowledge of  the use of “Private Special Masters” to hide tax fraud in Connecticut family courts.

She told the group:

Since the filmed meetings are available for public viewing online, there’s now public knowledge of a credible witness who knows about Connecticut’s attorneys and retired judges hiding tax fraud in child custody cases.

Judgments in those cases will need to be set aside, federal authorities will need to investigate, and Ms. Verraneault will have been proven right about how long all of this is going to take.

5 thoughts on “Task Force Member: Might be a Year-Long Thing”