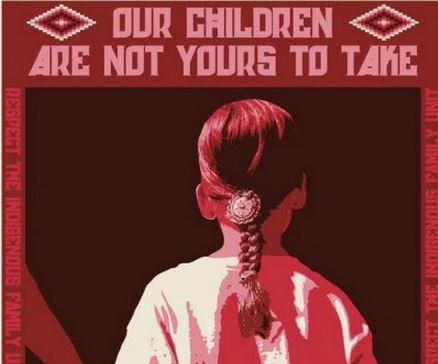 “Something is going on. Something that shocks
the conscience is happening …” Chase Iron Eyes

From The Lakota Child Rescue Project:

One afternoon in 2008, Janice Howe—a Dakota Indian—waited at the bus stop for her grandchildren to come home from school. They never arrived.

Earlier that day, a social worker had taken Janice’s grandchildren. They were driven to a white foster facility hundreds of miles away. The reason stated in the case file: a “rumor” that Janice’s daughter, Erin Yellow Robe, had been using drugs. She hadn’t. To this day, Janice’s daughter hasn’t been charged or arrested for drugs—or anything else.

For the next year and a half, Janice fought to get her grandchildren back. She called the state’s director of social services. She wrote letters to the governor. Finally, she convinced her tribal council to threaten the state with kidnapping. A few weeks later, her grandchildren were returned…on a “trial basis.”

Since 2005 the Lakota People’s Law Project has been working with hundreds of families who share Janice’s story. But they haven’t all been so lucky. Over the past decade, the state of South Dakota has removed more than 5,000 Native American children from their homes … continue reading …