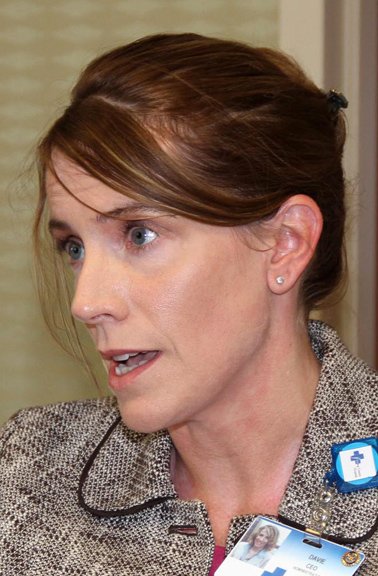 As she left the custody hearing, Lloyd was arrested on an outstanding warrant for “parenting interference,” said Monica Hill, attorney for Brett Lloyd, Davie Lloyd’s ex-husband. She posted 10 percent of a $90,000 bond.

Davie Lloyd was arrested Aug. 20 in Kentucky for being a “fugitive from another state” because of the outstanding Montana warrant.

With her arrest Tuesday, the Kentucky extradition case is resolved, but the criminal case in Montana will proceed.

A spokesperson with the Lewis and Clark County Justice Court said the court’s procedure for felony cases is to have a preliminary hearing which will determine if the case should be referred to district court. Davie Lloyd is scheduled for a preliminary hearing for the criminal case Sept. 17.

“The Montana attorney for Ms. Lloyd is working to resolve that case and believes that common sense will prevail, and ultimately this couple will have a workable visitation schedule that takes into consideration the distance between their respective homes,” the statement said.

Hill said her client has nothing to do with the criminal case and how it proceeds.

McCarter has taken the case under advisement. No date has been set for a decision.

A joint statement from Schumacher and Delores Baker, also an attorney for Davie Lloyd, indicated that although Davie Lloyd held a news conference concerning the custody matter and related criminal charge when the Kentucky warrant was first served, it was only to correct any incorrect information Brett Lloyd was circulating.

“She will not be commenting any further in regards to what is truly just a private family matter concerning visitation,” according to the statement. “She appreciates the outpouring of support from her friends, coworkers and others who have been through very similar situations when dealing with divorce issues.”