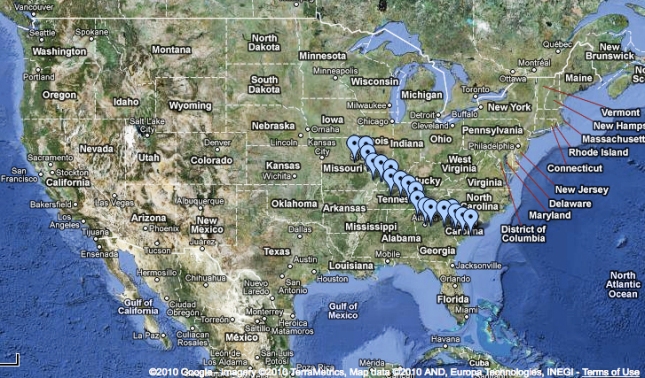 Please click on the link above to see local  TV media coverage from Georgia about the three men riding their bicycles all the way across the country. Think about it.

So where’s the national news coverage?

Is anyone who can make a difference paying attention?

If the statistics say “1 in 4 girls” and “1 in 6 boys”, shouldn’t the national mainstream media be covering this story of the 3 young men riding their bikes across America? Shouldn’t our nation’s family courts have some kind of plan to protect those 1 in 4 girls and 1 in 6 boys from their abusers?

There are hundreds of  distraught mothers all across the country. They’re naming names – and some are calling people names with justifiable anger. Our nation’s family courts have thrown them and their children into the family court ring to fend for themselves with family court rules such as:

Many use the phrase “family court’s dirty little secret” in reference to the federal funding for abusive fathers and backroom deals in child abuse cases. That “dirty little secret” is definitely a huge chunk of the national family court crisis that needs to be addressed, but it’s one that I don’t understand so I’ll have to leave the “following of the paper trials” and resulting explanations to the federal investigators.

Here’s another “dirty little secret of the family court” that I do understand and it’s one that the national mainstream media should be covering – along with the fact that there are now, at this moment, 3 amazing young men riding their bicycles across our continent to raise awareness of the importance of  preventing sexual abuse of children.

What do you think family court does when abuse occurs in the families of 1 in 4 girls and 1 in 6 boys?

Look it up. See what the policy is. Then please start to talk about it.

One therapy that’s used on our children who’ve been abused is called Dr. Richard Gardner’s “threat therapy”. Seriously. That’s what it’s called. In “threat therapy”, when abused children refuse to “visit” with their father who sexually abused them, they’re told that if they don’t go, they’ll have to go live with their abuser and that their mother will be put in jail.

You think I’m making this stuff up? Look it up. Then please start to talk about it.